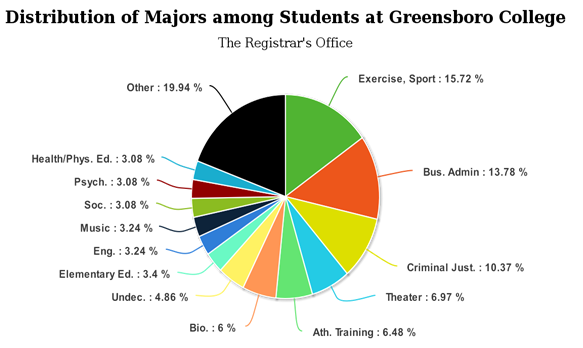 Note: This article previously appeared in the first Spring 2016 issue of the Collegian.

Greensboro College, as everyone knows, has a relatively small student body. In fact, only about twelve hundred students are enrolled at our school. It is unusual, then, that Greensboro College has so many majors available. With so many majors and so few students, naturally someone is bound to wonder if he or she is the only person attempting to get a particular degree. The Collegian, thanks to the cooperation of the Registrar’s Office, was able to find out the answer to this interesting question.

Apparently, no one is alone when trying to get a degree. According to the data we received, if there are 1,200 people at Greensboro College, then even the person who is getting a Chemistry degree has a fellow student who is working toward the same goal (Those two special students only make up 0.16% of the student body, so they are not shown on the pie chart above). On the other hand, the person getting an Exercise and Sport Study degree shares his or her ambition with about one hundred and eighty-eight people!

There are also interesting, unexpected trends that can be observed in the statistics. For instance, the Religion major is only sought by 0.49% of the student body, which is odd for a college with ties to the Methodist Church. In contrast, more than 25% of the student body is pursuing a degree related to health or fitness!

This information is not a definite judge of the academic interests of the student body as it fails to account for minors, concentrations, and other similar factors. Another drawback with this data is that it cannot show whether or not people have changed their major during the course of their education. Nevertheless, it provides a helpful rough estimate and is, at minimum, extremely intriguing.

Here is the raw data sent to us by the Registrar’s Office:

This article was previously written by Joshua Fitzgerald. 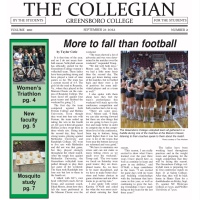