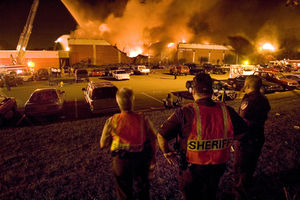 It was 10 years ago, November 1st when a community was changed forever. The local high school, so full of life and activity lay silent in ashes on the ground. The Eastern Guilford high school community was affected by a fire that started in a chemistry lab on the 2nd floor.

Everyone’s first thoughts were, “It’s an accident.” After, it was ruled an arson case which still today, has not been solved. For those who were there, the memories from the fire are still burned in our hearts today. With the Eastern community being a small one we all know each other. I had the pleasure of sitting down and speaking with staff member and an alumna of Eastern Guilford for an interview about the events of that day. I spoke with Lisa Faircloth, who at the time of the fire, was a freshman at Eastern Guilford. Lisa heard the fire alarm around her lunchtime which would be about 1 p.m. She knew it was serious when the teachers were rushing her, and other students, out of the building. She said they were yelling, “This is NOT a drill.” When everyone was out safe and sound there was smoke and it was obvious that the building was on fire. Lisa also mentioned that she felt mixed emotions about this. She felt scared, overwhelmed and shock. She couldn’t believe what was happening. The school was on fire, all of it was real.

I also spoke with Bob Prinz, 2003 GC Alumni and former teacher at Eastern Guilford. It was his planning period and he was in another teacher’s room when the fire alarm went off. It was not normal to have one during lunch time. He wanted to see what was happening so he turned the corner and that’s when he saw a teacher running towards him followed by a hallway full of smoke

He handled the situation as best as anyone could. He wanted to get all the kids in the surrounding classrooms got out safely. After that they settled down a bit and waited. This was when everyone’s curiosity set in. Questions started forming, “Where’s the fire? Is it bad? Etc.” Prinz mentions, “My initial thought was that it was probably a trashcan fire, they’ll get it put out, we’ll be back in school the next day. Maybe they will just have a small area sectioned off that we can’t use. It didn’t take long to change that thought.” The emotions were high and rampant. Everyone was feeling something. Prinz remembers that for him it was surreal. He comments, “watching the smoke get thicker and darker, then seeing the roof collapse with flames shooting up…. we were all at a loss for words.”

Of course, they all, including Prinz, felt confusion. The questions that ran through his mind at that moment were, “What happened now? Do we still have a job? Will we be transferred? Will the students be transferred? What do we do. It was confusing and sad.” Teachers, students, everyone was crying. Some teachers even lost 20-30 years of work. All lost personal items. A month later everyone found out it was arson. That’s when the anger set in. Although this was a horrible situation for the wildcats Good has come out of it. On the happier note Prinz states, “For me, there was good that came from it all. I coached Wrestling, and we had to hold our practices at the middle school due to the fire. Before then I had never gone to the school. Right before practice one night, I met a teacher, Miss Hodge. Ten years later she is now Mrs. Prinz and we have two beautiful children. Had it not been for that fire, I’m sure we would have never met.”

Although what happened at Eastern Guilford High school that day was nothing short of tragic, good did come out of bad. Good things like, A new school, new memories to be made. Everyone got out safely and no one got hurt. The new school opened for business in 2009. 10 years later and here we are, still united as one big Wildcat family, once a wildcat always a wildcat.

(This Article is written by Lauren Smith)