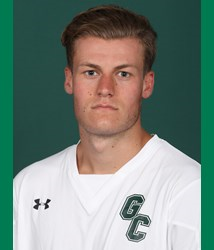 Returning junior defensive midfield Ryan Mule is excited and prepared for this upcoming soccer season. He is helping his team out by creating opportunities to transition the game to an attacking mindset from a defensive standpoint. Starting in all 15 games last season, Mule was an essential part to the team’s success. His job as a defensive midfielder is to redistribute the ball and control the pace of the game.

Originally from Cambridge, England, Mule attended Hedingham High School before decid- ing to pack everything up, move to the States and continue not only his soccer career but also his education here at Greensboro College. In addition to being a key player on the field, Mule also brings his talents to the classroom. He was named to the Academic All-Conference Team for the second straight season.

Mule has high expectations for the season. “We have some good returners coming back and a solid set of incoming freshmen.”

Mule said that some of the biggest competitors they will have this season will be Maryville and North Carolina Wesleyan, which ended their seasons last year placing first and second in conference. Recent polls states that Greensboro is ranked second in the polls.

“Polls are just polls,” Mule said when asked if he believes this is accurate information. “Last year we were ranked No. 1 in conference and didn’t come through. This year our two main goals for the season are winning the conference tournament and to make an NCAA appearance. That is what we will be focusing on.”

Make sure to come out and support Ryan as he and the rest of his teammates battle it out to win that Conference Tournament.