On February 6th, the Pride Baseball team took to the field to play their first game of the season. They faced Covenant College in a double header and fell to Covenant in both games with scores of 10-4 and 9-4.

“For our first game with a whole new coaching staff and playing with a pretty much new team, I think we did okay. The scores don’t reflect the way we played. I’m excited to see what the rest of the season has in store for us,” said junior Aaron Brown.

The game started out strong with senior Dustin Minnick pitching.

“I feel like this game was a good start for our season. We’re able to build from what mistakes were made during these first two games,” said Minnick.

Senior J.P. Lisk was one of the many players that helped contribute to the four runs the team received.

“I did my best in the game and tried to contribute as much as I could. I think overall as a team we did our best too. We just have to keep pushing here on out,” Lisk stated.

The Pride will take on Wesley College and Hampden-Sydney College the weekend of February 19th through the 21st in a tournament in Hampden-Sydney, Virginia. Best of luck to the team. Roll Pride, Roll!

This article was written by Marquette Fuller. 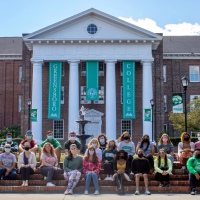